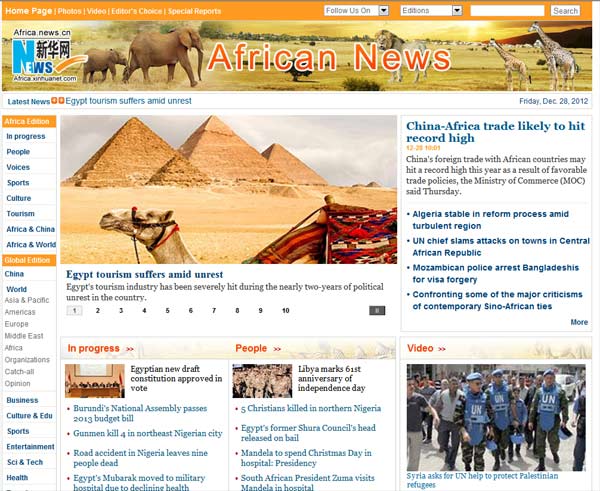 Xinhuanet, the online news information service of the news agency Xinhua is launching its 9th edition, promoting the African continent.

The Chinese news provider since its creation in 1997 has currently 8 editions in 8 languages: Chinese (simplified and traditional), English, French, Spanish, Russian, Arabic, Japanese and Tibetan.

After the 4th China-Africa Friendship Award ceremony being held in Beijing on December 21st, 2012, China has re-confirmed its policies to strengthen cooperation with Africa.  Foreign Ministry spokesman Hong Lei said: “China-Africa economic and trade cooperation is mutually beneficial and win-win, and strongly boosts the common development of the two sides,”

Furthermore, Xinhuanet’s intent is to reach out a larger audience and learn about the often unknown continent. It will  introduce this region to the international community: a more comprehensive and objective range of news information with a more open-minded vision. The available information will be beneficial to anyone who wants to know more about what is actually happening in Africa. The news service provider stated that we should find “admirable writings” on news stories, on all socio-economic aspects of the continent as well as pictures showing the beauty side of its regions.

According to Xinhua, the African Edition will provide extensive coverage to their economic cooperation due to the increasing business activities between China and Africa. “China welcomes more French input in Africa, and believes it will not only benefit the development of Chinese and French companies but also Africa’s sustainable development,” Hong replied, in response to the current China-Africa cooperation strategies put in place.