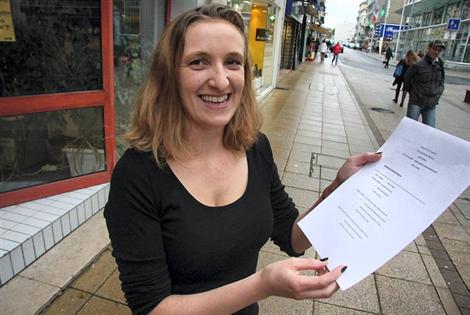 Looking for an employment opportunity for Sandrine Paquet was not an easy task after raising her children. The 29-year-old French housewife residing in Lisieux, Calvados, posted a surprisingly humorous cover letter that she posted on the websites: Vivastreet and Leboncoin.

Instead of using the conventional way, she opted for a more original method to find a job. Her application letter was so hilarious that she was nicknamed “Super Mom” by the online community. It created a huge buzz on social media, particularly on Twitter and Facebook.

As expected, the major French media newspapers  including Le Monde, Le Figaro and Le Parisien have also covered the story of Super Mom.

Furthermore, she has received numerous support and encouragement messages from other housewives all over Europe. She did not expect such craze towards social media networks.

According to Paquet, she has written the infamous letter in 30 minutes. She has got a few job offers involving working from home but she stated that after spending so much time at home for 3 years taking care of her children, she would rather move out of the house for work.

Meanwhile, in spite of the enthusiastic media attention witnessed, Paquet has not yet been contacted for a suitable opportunity. Some reactions from the social media argued that this very dose of humor is apparently not to the taste of most employers.

Here are some highlights of this cover letter:

Super mom looking for a job, a real one

The youngest goes to school … No toys to put away, no vomit to clean …
It is time that I start doing what I should have never stopped: WORK.
Then, of course, when you see my CV, you will fade … a mother at home, it develops a lot of skills that will be very useful.
I know how to enhance a product: 2 eyes, 1 mouth and my mashed potato Mousline become a masterpiece worthy of Picasso. And I barely exaggerate…
-I am organized: 9 am putting things in order, 10 am cleaning, 11 am ironing 12:00pm feed the children with purée.
-I am smiling in all circumstances: But of course it was a good idea to confuse your paint and my varnish !
-I am dynamic: The last time I sat down, it was … Pfffff … What day was it? The day before yesterday???
-I am wilful: Like any at-home mom who can get by.
-I am never sick, I do not have time.
Finally, having served five years in a police station where I basically answered the phone and rarely misbehaved, I am now glutted with the: “Chief, yes chief” …
And finally to finish, I would like to learn a new profession that does not scare me whatever it is. (Except childcare of course…)
(To avoid further requests of naked pictures and / or with puppies, I will only disclose my phone number to real employers.)