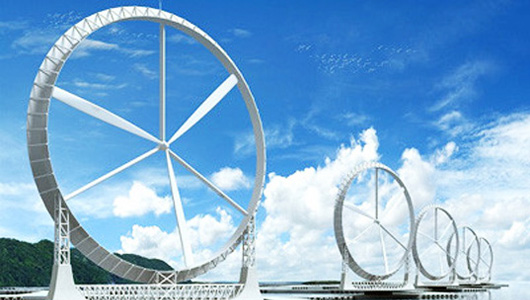 A surprising aerodynamic innovation in wind turbine design called the ‘wind lens’ could triple the output of a typical wind turbine, making it less costly than nuclear power.

NOTE: Some major wind projects like the proposed TWE Carbon Valley project in Wyoming are already pricing in significantly lower than coal power — $80 per MWh for wind versus $90 per MWh for coal — and that is without government subsidies using today’s wind turbine technology.
The International Clean Energy Analysis (ICEA) gateway estimates that the U.S. possesses 2.2 million km2 of high wind potential (Class 3-7 winds) — about 850,000 square miles of land that could yield high levels of wind energy. This makes the U.S. something of a Saudi Arabia for wind energy, ranked third in the world for total wind energy potential.
Let’s say we developed just 20 percent of those wind resources — 170,000 square miles (440,000 km2) or an area roughly 1/4 the size of Alaska — we could produce a whopping 8.7 billion megawatt hours of electricity each year (based on a theoretical conversion of six 1.5 MW turbines per km2 and an average output of 25 percent. (1.5 MW x 365 days x 24 hrs x 25% = 3,285 MWh’s).
The United States uses about 26.6 billion MWh’s, so at the above rate we could satisfy a full one-third of our total annual energy needs. (Of course, this assumes the concurrent deployment of a nationwide Smart Grid that could store and disburse the variable sources of wind power as needed using a variety of technologies — gas or coal peaking, utility scale storage via batteries or fly-wheels, etc).
Now what if a breakthrough came along that potentially tripled the energy output of those turbines? You see where I’m going. We could in theory supply the TOTAL annual energy needs of the U.S. simply by exploiting 20 percent of our available wind resources.
Well, such a breakthrough has been made, and it’s called the “wind lens.”