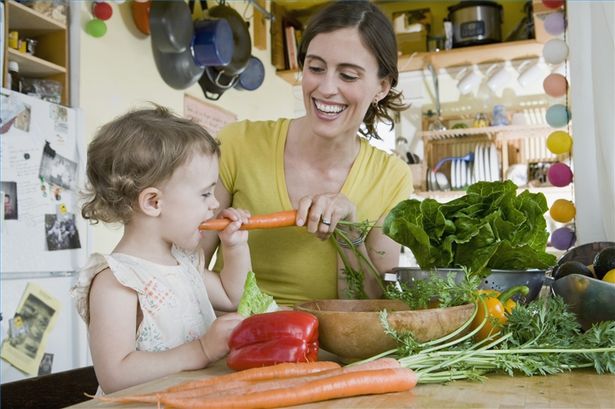 Whether for ethical or health reasons, teens and adults regularly choose vegetarian, vegan or even raw food lifestyles (which is what it sounds like — no cooking allowed). But is it healthy to raise babies and children with these food restrictions? Recent research says that meat and cooked food were necessary for the early development of the human brain. So, with celebrity foodies, like reality star Bethenny Frankel, saying their toddlers have chosen vegetarianism, the question is, should a parent allow that? What about vegetarian and vegan parents? Should they raise their kids as omnivores for healthy brain development?

The research, published in the journal Proceedings of the National Academy of Sciences (and detailed in LiveScience), is based on anthropological studies that show the modern human brain, compared to other primates, consumes 20 percent of the body’s energy when at rest. That’s twice what other primates’ brains use, according to the research. Meat, and its caloric boost, were needed to feed the developing brain. Without meat consumption, particularly cooked, researchers, cited in a study published on PLOS One, believe the human brain wouldn’t have evolved to its modern size.

Generally, primates with larger mass have larger brains and more neurons. However, gorillas, which subsist on raw, vegan diets without any animal protein, have smaller brains with fewer neurons than humans in spite of their larger mass. Their diet requires many hours of eating only plants to support the gorilla’s large size. In order to support a human-like brain, gorillas would need to eat for several more hours per day. (They already eat for about 80 percent of daylight hours.) In addition to lack of animal protein, lack of cooking can also reduce the amount of some nutrients and calories released from foods. (Note: The research doesn’t inidicate whether or not raw or vegan diets are necessarily unhealthy for modern young brain development.)

About 3 percent of Americans are vegetarians. The popularity of vegetarian and vegan diets among celebrities is cited as part of the increasing trend (youth vegetarianism increased from 2 percent over the past decade). The American Dietetic Association says that vegetarianism can actually benefit kids with lower cholesterol fats and higher fiber from fruits and vegetables. But, being a vegetarian and raising vegetarian kids isn’t always easy.

Several key nutrients are missing in an average vegetarian and vegan diet and will need to be replaced or supplemented.

While being the parent of a vegetarian or vegan child can be more difficult in a primarily omnivore society, it can be done with sufficient preparation and planning. It’s unclear whether a major decrease in meat consumption worldwide will effect the evolution of the human brain; however, for your family, proper planning for healthy nutrition is the key to your child’s development.