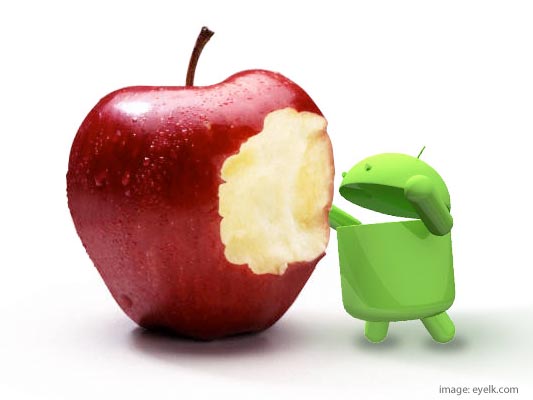 The Google chairman says they are winning the war against Apple and that war resembles the PC vs Macintosh war during the 90’s.

Google Chairman Eric Schmidt believes that Android’s war with iOS is just about over — and that his team won.

Speaking to Bloomberg in an interview published this morning, Schmidt said Android’s ongoing market-share battle with Apple’s iOS “is of the scale of 20 years ago — Microsoft versus Apple.” He went on to say that in his opinion, “we’re winning that war pretty clearly now.”

It might be difficult to argue with Schmidt’s point. Research firm IDC reported last month that during the third quarter, Android shipments accounted for 75 percent of the worldwide market. Apple’s iOS came in second with 14.9 percent share. During the same period in 2011, Android’s share was 57.5 percent ownership, compared with a 13.8 percent share for iOS.

Schmidt’s comparison to Windows versus OS X might also be appropriate. Windows was able to dominate the operating system market because a slew of vendors were bundling the software in their products. Apple, meanwhile, kept OS X for itself, and only used the software on its own products.

A similar scenario plays out in the mobile market. There are countless Android-based devices hitting store shelves each year, but there are far fewer iOS-based products.

Schmidt didn’t focus his interview only on Apple competition. In a brief mention of Facebook, the Google chairman said he believes Google+ is a “viable competitor to Facebook.”