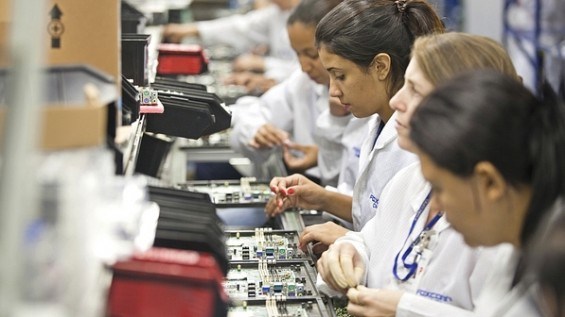 “We are looking at doing more manufacturing in the U.S. because, in general, customers want more to be done there,” Louis Woo, a Foxconn spokesman, said in a phone interview. He declined to comment on individual clients or specific plans.

Apple, the world’s most valuable company and Foxconn’s biggest client, plans to spend more than $100 million next year on building Mac computers in the U.S., Chief Executive OfficerTim Cook said. Foxconn, based in Taipei, has 1.6 million workers globally, including factories in California and Texas that make partially-assembled products such as servers, Woo said.

“Supply chain is one of the big challenges for U.S. expansion,” Woo said. “In addition, any manufacturing we take back to the U.S. needs to leverage high-value engineering talent there in comparison to the low-cost labor of China.”

It is not the first time that Foxconn plans to build factories out of China. Foxconn opened a few factories in Brazil a few years ago and it is planning to expand its number of factories in South America. Foxconn’s parent company Hon Hai on Friday announced that subsidiary Foxconn CMMSG Industria de Electronicos has purchased more land in Brazil, AFP reports. The transaction with Toulouse Incorporacao will see Foxconn gain approximately 350 acres and it will cost the company $12.64 million. Foxconn said previously that it planned to invest $492 million in a new facility in Sao Paulo, and it currently runs four other factories in Brazil.