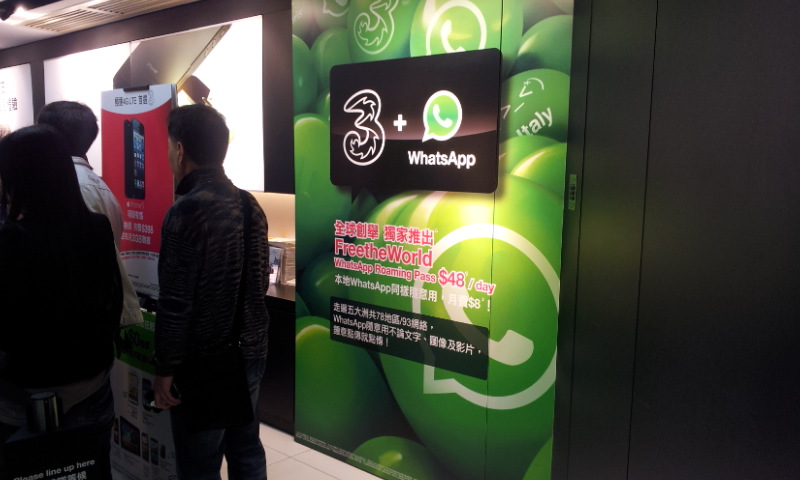 Planning to go abroad but don’t want to use expensive data roaming? No problem. If you are willing to only use Whatsapp during your trip, 3 Hong Kong has an unlimited roaming data plan for only HK$48.00 a day.

Whatsapp is by far the most popular instant messaging app in HK, the others being Line, WeChat and Cacao Talk. A recent study shows that 90% of smart phone users in Hong Kong have Whatsapp installed in their phones and that number keeps growing.

WhatsApp, founded in 2009 in Silicon Valley, has received some funding from Sequoia Capital, a U.S. venture capital. To help finance its operations, the app also charges its users an annual subscription fee. For the iPhone, WhatsApp costs a dollar a year from the beginning; for handsets using Android and other operating systems, the app is free for the first year and costs a dollar annually from the second year. This system makes the business more sustainable long-term and helps create an environment in which users don’t have to worry about spending additional money while using the service, said WhatsApp co-founder Jan Koum on his visit to Hong Kong in September.

3 Hong Kong is targeting those users who have Whatsapp installed in their phones but haven’t applied for a data plan yet. In most cases, those users either do not use Whatsapp very often, or use it over a WiFi connection. For HK$8 a month, users will be able to use unlimited data on Whatsapp at any location across the SAR. If 3 HK’s Whatsapp plan becomes successful, other operators are expected to come up with similar data plans during the following months.