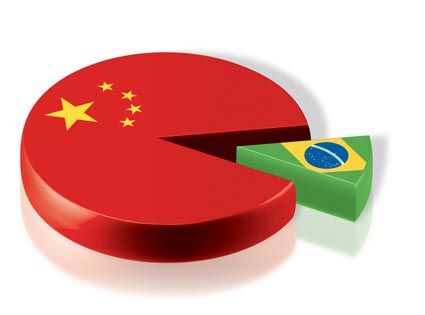 Home to more than 1.3 billion people, about one-seventh of the world’s population, China has become one of the fastest growing economies in the world and the second largest exporter and the third largest importer of goods.

During the process of its industrialization, China reduced its poverty rate from 53% in 1981 to 8% in 2001, hence, becoming an emerging superpower. On the other hand, Brazil, the largest country in Latin America, with 192 million inhabitants, still skates with discussions and ad hoc measures, such as exemptions from payroll and interest reduction, to reverse the inefficiency structural competitiveness.

Economic reforms promoted over the years gave international recognition to Brazil, but social inequality is still great and its industrial park is experiencing a period of de-industrialization. Brazil is a country that exports cocoa today to import processed chocolate powder tomorrow. Yet, it is seen as a country with great development potential, but it is forgetting to navigate the seas of growth, just like a sailor who boasts the distance, but forgets to look at the long path that he still needs to make.

200 years ago, Napoleon Bonaparte predicted: “Let China sleep for when she wakes up, the world will tremble.” The country ranks second in the world rankings economy, only behind the United States.

Many products sold today have the label “made in China” on them. Almost like magic, they put any product on the market in a matter of weeks, with prices below those charged elsewhere, including Brazil, where the costs are very high to start a new business, invest in machinery, labor, raw material, production and marketing.

What’s the secret? A Brazilian worker costs 3 times more than a Chinese worker for an employer. And with the addition of taxes and benefits, this bill doubles.

The Chinese works hard and gets little. It is almost a system of slavery – the cruel face of socialism.  This is the strategy they use to win the Western market: absurdly low prices, products with sometimes dubious quality and enslaved workers.

The future? China will be the world’s only industrial park and other countries, including Brazil, will be at the mercy of the monopoly. Brazil and China are countries equally large, have ideal similar growth, but walk opposite paths.

Who is wrong? Both. In China, the goal is to reach the rank of a major world power, endangering even environmental sustainability and quality of life of its inhabitants. But one point to wonder, is the encouragement given to national productivity, technology and performance. Separating the wheat from the chaff, you must follow part of this example, boosting industry and encouraging the creation of jobs, but always respecting the workers and the environment. In Brazil, there is a lack of a serious policy to reduce the weight of the tax burden, the amount of social security contributions and labor burden that companies have to struggle every day to survive in this environment, so hostile to business and production. Under current conditions there is no way the Brazilian industry can compete commercially with other emerging nations, including China.

You must act and stop collecting ideas that can lose the power of action before even leaving the paper. If nothing is done, the consequences will become increasingly difficult to overcome.