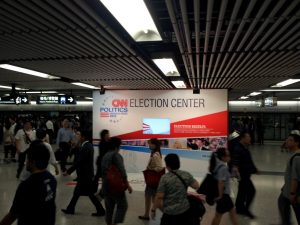 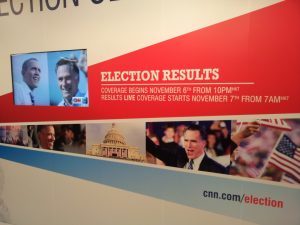 Apparently, CNN will broadcast live coverage of the upcoming US presidential election right in the middle of the platform of the Island Line on the platform that goes to Chai Wan.

The live coverage beging on November 6 from 10PM (HKT) and the results will started to be announced on November 7 from 7AM (HKT).

The result of this election is important in a sense that the HK dollars is pegged to the US dollar, something that was first introduced in 1972 and has kept that way since then. A combination of fear of a de-peg between the Hong Kong and US dollar and favorable levels in the forward market has encouraged insurers in Hong Kong to hedge out more of their dollar currency risk.

Hong Kong insurers have historically either been unhedged or just hedged a smaller proportion of their foreign currency bond investments due to the Hong Kong dollar’s peg to the US dollar, which insulates insurers from the effects of currency fluctuations.