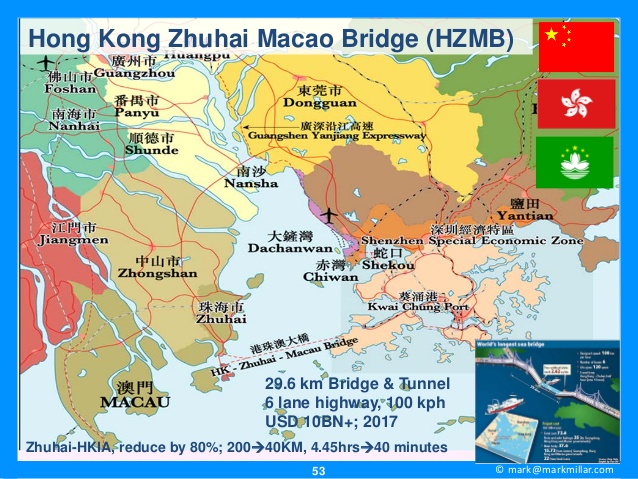 The symbolism of a new superpower

As the Hong Kong-Zhuhai-Macao Bridge (HZMB) opened this past Tuesday, October 24, it was a moment to understand the far reaches of China and how it started to rise.

The Bridge itself was built at a staggering cost of 126.9 billion RMB.  The cost per vehicle to ride this 29.6 kilometre journey is around 150+ RMB, round-trip will come to 300.  The Bridge will use three currencies at the toll posts: Yuan, Hong Kong Dollars and MOP.  The distance will cover tunnels, bridges and three artificial islands.

However, what does this mean for Hong Kong and other countries?

One thing is certain.  China has been on the economic rise since 2011 and it was estimated that it would supersede the United States by 2015.  It wasn’t until last year when the RMB finally became one of the currency symbols with the highest-rates of exchange.  Therefore, joining an elite selection of countries, such as: the U.S., U.K. Germany (with the Euro), Russia and Japan.

This literal ‘leap forward’ hasn’t gone unnoticed and drew some criticism.  But you have to live in China to realize not only the negatives. It’s to also see the positive changes, effects and how things are [by example] getting better and better.

This Bridge is the new symbolism and a moment of pride for most Chinese.  A crossing to unite China further and as one; whether we like it or not!

The new Bridge will also relieve some of the stress for those millions crossing thru with the Guangzhou buses, railways, and Shenzhen’s borders and ports.

But, it is also throwing China into the status of the next global-economic superpower.

This happened over a century before with the United States, when the then President Theodore Roosevelt sent out ‘a white fleet’ of seven ships to show the world the might of America as a new empire.

The same is happening throughout China and its coastlines; with the increment of its Navy.  And not only throughout inner/mainland China, but it has been buying-up businesses in the U.S. and U.K.  Dipping into the Australian markets and its tourism. Further incurring into the African Continent and aggressively investing into everything: from construction companies, mines, roads and the railway systems.

The ‘One Belt Road’ goes into those plans of expansion.  Taking roads and uniting them throughout: Asia, Europe and Africa.

The Hong Kong-Zhuhai-Macao Bridge is one such example.  This risky project has to be built to last, because of its location in ‘typhoon alley’.  Surviving its first mega-typhoon this past September, 2018 and this is part of a greater infrastructure.

This is the time, that other than Chinese taking to planes and trains for travel.  People will also take to the roadways to experience a different side of China and its Autonomous Regions.

A very interesting time indeed!  One for the road, and hopefully this expansion can mean peace and prosperous business for the rest of the world.