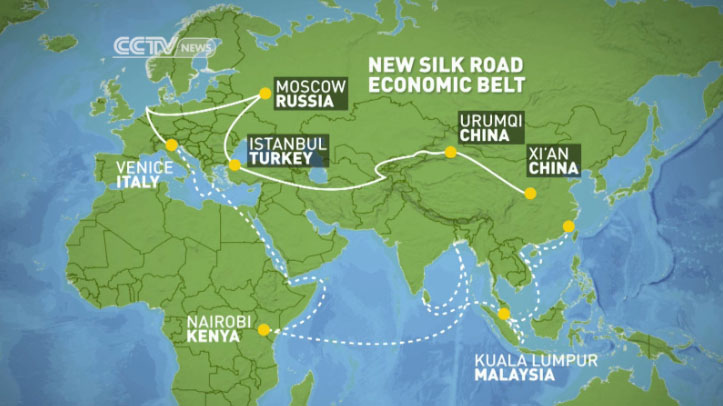 Belt and Road is to establish China’s New Silk Road for the 21st Century across lands and through maritime expansion.

With China’s growth slowing down, what economist have suggested to avoid a problem of inflation is to invest overseas.

The positives of doing this would mean benefits for China as the new-economic empire.  Not only directly benefiting the Chinese population, but also 68 countries across: Asia, the Middle East and Africa.

This capital investment can positively affect 4.4 billion people.  Assisting millions out of poverty.  Further, as this project grows, this means a creation of new wealth for 40 percent of the world’s GDP.

This would mean the linking of trade deals and the building of better infrastructural projects throughout Eurasia and the Pacific.

What’s even more exciting, is the betterment of the train system.  This one would cover not only from Beijing to Moscow.  But now, it’d be one between Eastern China and London.  Faster and better, I can get behind that, for now.

The BR project can continue to benefit start-up companies in the U.A.E. and possibly assist in the Middle Eastern peace process.  Therefore, bringing people together.  I can also get behind this plan.

There’s an idea, with freer trade, peace can come to many unstable regions of the world.

Take the Palestinian problem, 60 to 65% live in poverty and unemployment; causing one of the biggest conflicts presently with Israel.  As the BR intervenes, the project can inject an economic-cash flow and lift those affected; which are in a good majority angry minorities living in slumming conditions.

This plan is not only good for China, but it also infuses money into the Australian Hotel industry for a greater exchange of tourist between China and Australia; investing in nuclear power and furthermore, using it in a peaceful/responsible way; and the capital income is to also invest in Polish orchards and lift Poland’s economy out of third-world conditions.

Like they say in business, it’s for the entire world to ‘wet its beak’!

Now, what the BR sells is international investments and equal partnership.  And this is fine and dandy, but also this plan has its flaws…

BR has to be careful in investing in unstable and corrupted areas across Asia, Southeast Asia and Africa; especially in places with a long history of corruption and abuse.

I’d say, yes, ship the overproduction offshore.  However, be aware of people taking advantage and creating for themselves off-shore accounts.  Because this can certainly happen with parts of this projects if ‘watch dogs’ aren’t implemented!

The BR’s other problem can be for ‘dirty business professionals’ who want to hide their illegal capital; so, they begin to smuggle money out of the country and begin to launder it.  Here, I can’t get behind the project.

Chairman Xi, I believe he has a positive influence on making this idea a reality and letting it come to life!

If it’s for China’s future prosperity, peaceful and helping the poor; I’m all for it!

But it comes with a dire warning, it has to be done in a way to benefit not only the rich or 3% of our planet.  I hope it can trickle down to help the other 97% in China and around the world!