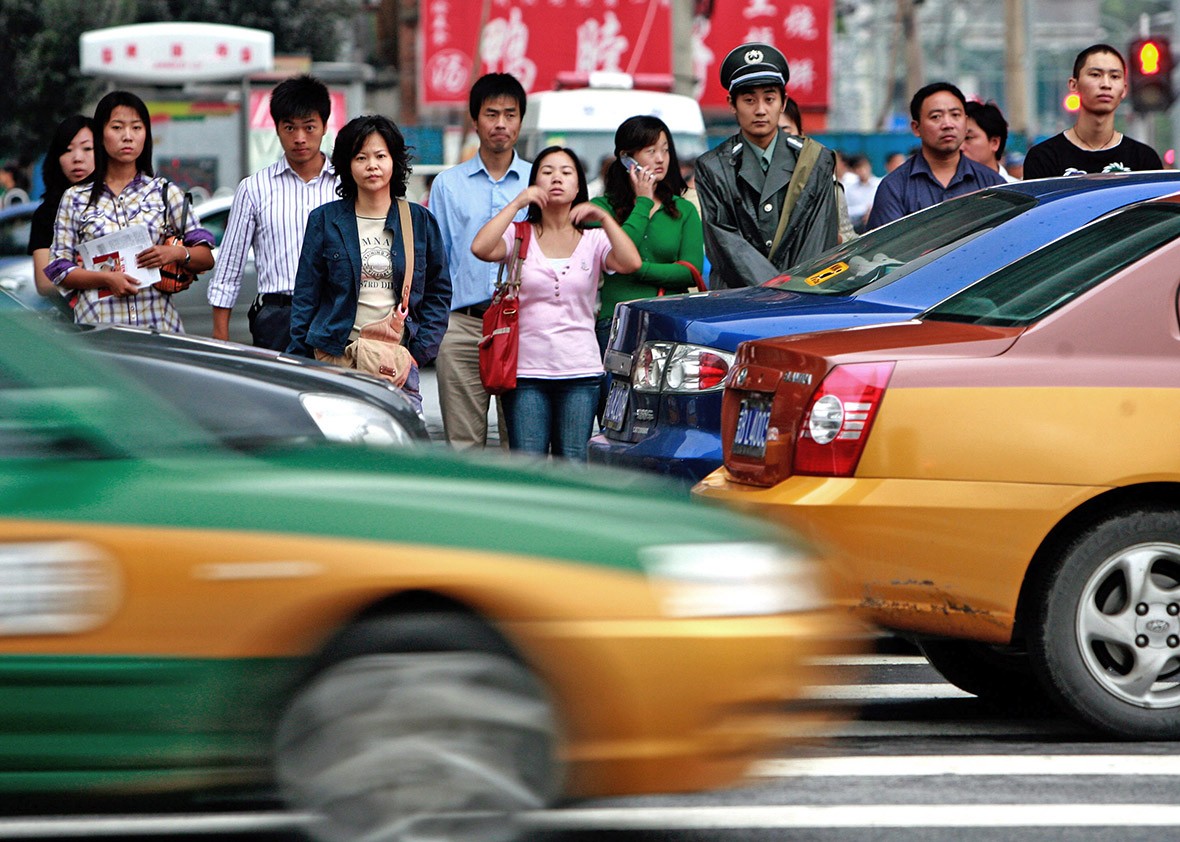 In China I’ve often seen pedestrians who honestly don’t have a clue on how to glide their own roadways.

A pedestrian ought to walk the sidewalk and the car is meant for the road.  But with so many bikes on the walking path, nobody can be for certain which is which.

Bikes are driven on the pedestrian path, when they ought to be on the road.

It’s the law, if anybody should care to read the drivers guidelines.  And here’s where the problem generates, nobody is applying the laws correctly, since they are too confusing!  But what about common sense?

Repeatedly, I see the many and not the few walk and drive with “tunnel vision”, only looking in one direction and forgetting to look to the left and right for safety.

Most don’t bother to look and it’s by a sheer miracle that the majority of people don’t get into more accidents!

The same constitutes for drivers, too much car and little ability on the wheel.

China does have a clear definition of the zebra-crossing.  Instead, a good portion of the drivers use it as a speeding-way to not bother and stop for the pedestrians.

What I see constantly are vehicles parked and blocking pathways and zebra-crossings for pedestrians.  When are the laws of the land applied or people are just ‘placing them where the sun doesn’t shine’!

A driver mustn’t forget their humanity.  A vehicle can actually kill somebody. Therefore, get off the bloody phone and stop ‘texting’ while on the wheel!

Drivers and pedestrians have to know their whereabouts/surroundings.

My anger will usually stem when people tell me, “This is China!”

I get boisterous when people are driving down the wrong side of the road.  I’ll say something to the drivers in consternation.  Sorry, it’s not to ridicule, but to educate. Hey, you’re on the wheel and this can be life or death!

Recently, I had an experience, as the mother of one of my students was driving me to the metro station.  I mean, this person was being extremely careful, when an idiot bicyclist collided against the car when she [the bicyclist] wasn’t looking!

The bicyclist became dramatic, when it was clearly her fault!

What happened next was the way it was handled…  The female bicyclist screamed compensation!  Now, if it was me, I wouldn’t have offered anything till the police arrived; but alas, the driver of the car was offering this stupid bicyclist a ‘compensation’ to avoid the hassles!

At first the lady on the bike was walking fine.  Then, as the rubberneckers/onlookers gathered in a curious wave, she suddenly pretended to have a shocking limp!

The drivers behind our vehicle were honking madly!  It’s when my New York temper came out and I got out of the car and waved them to pass us!  Did you all know, the person behind us could barely handle their car or was too afraid to pass us!

Then, I went to the bicyclist and waved with my hand, “Jingcha! Let’s see how really injured you are…” and just like that, it was all over!

The bike lady was clearly trying to take advantage!

What got to me was the indecision in everybody and not knowing what to do in handling the situation!