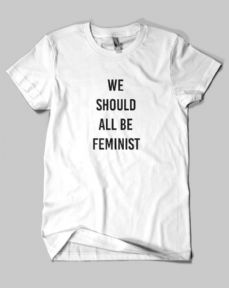 The “it girl” in a white T-shirt

With the slogan, “We should all be feminist” and fashion week passing throughout the four-world capitals (London, Milan, New York and Paris) several weeks before…  One often wonders about this popular white T-shirt catching people’s eyes.

One mostly worn by supermodels, bloggers and Hollywood actors.

The problem with the above words stem from one constant situation in the fashion industry….  This industry is a double-standard in terms.  With women more often than not doing provocative poses for the public.  Possibly they get paid in the thousands or millions of dollars and at the same time, isn’t this an objectifying form in itself?

Its like saying, I got paid for services rendered and now, I’m complaining why men treat me like a sex object.

Many models just do that, after taking risque photos, showing their private parts–want to complain.  I could be more understanding and forgive them if they were pressured into a situation outside the contract.  But most do it out of their own free will.

Hey, ladies out there, I’m a strong believer in feminism and I’d proudly wear the Dior T-shirt.  My belief is to stand-up for a woman’s rights and walk down the street parading over 100 years of suffrage!

But there also comes a point when the movie as well as the fashion industry is being hypocritical.

I can completely comprehend a sexy photo shoot: with a tasteful bikini, dress or suit. However, what I can’t understand is when a supermodel is wearing a tanga-bathing suit, she’s grabbing her crouch and grasping at her breast for the whole world to see. Then, how can she get respect from the public by later wearing a T-shirt with a message?  Sorry, sounds totally ludicrous.

This sets the feminism cause back over a century.

Rendering the messages of women like Simone de Beauvoir or Gloria Steinem totally obsolete.  Messages which took the world by storm with freedom, equal opportunity and leadership for women throughout the 20th Century.

There’s still a long way to go on the perfection of feminism.  However, it should never by guided by the past messages of fashion.  A fashion world which only holds itself often to an abusive standard of, “One day you’re in, the next day you’re out!” Instead, it should be guided by the evolution of feminism for those who want an equal world sooner than the 22nd Century.