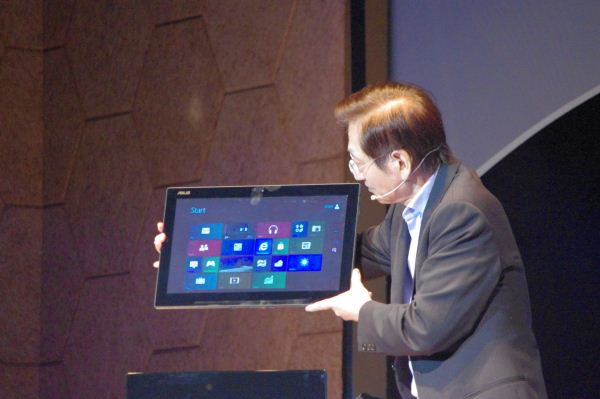 Don’t know what OS to use? Simple. Just go for a tablet that runs on both Windows 8 and Google Android.

Asus has revealed the first details on its Transformer AiO tablet during CES 2013, which is able to run both Windows 8 and Android as its operating systems.

The Transformer AiO was unveiled at Computex in the June of 2012, but the PC manufacturer has remained tight lipped on the 18.4-inch tablet ever since (apart from the FCC listing).

The 18.4 inch screen boasts a resolution of 1920×1080 and a 10-point touch LED-backlit IPS display, which can detach from its base in order to be used as a traditional tablet.

Powered by a 3rd generation Intel Core processor for running Windows 8 applications and an Nvidia Tegra quad-core processor for Android (4.1 Jelly Bean), users can choose between either platform at “the press of a button”.

Accompanied by height and tilt adjustments, the super-sized tablet also features Asus’ SonicMaster technology, which the company claims to offer “crystal-clear sound” via its integrated speakers.

A launch period wasn’t revealed for the Transformer AiO. However, the firm did reveal pricing details: the tablet will start at $1,299 with an Intel Core i3 processor, with higher prices for the versions housing Intel Core i5 and i7 chips.